When I am out on a ride I pay attention to any abnormal sounds that I hear my bike make-almost to the point of obsession.

I know I am over attentive because when I hear something that sounds like it could be coming from my bicycle, I always assume it is.

That squeal. “Oh, there must be a piece of metal in my brake pads.”
Nope. The car that has pulled alongside me in the intersection is the one with the bad brakes.

That weird chirping. “My bike must need a good cleaning.”
No. The bird flying overhead is singing.

That thudding. “Is a stick caught in my wheel?”
Umm, no. There are men doing construction work on a church nearby.

But I don’t always get it wrong, sometimes when I think my bike is making strange noises, my bike is actually making strange noises. The fix for these extraneous sounds is usually rather simple: either cleaning the bike, moving my boot away from the crank arm, adjusting the brakes, tightening the rack, straightening the computer sensor or fixing a leaking tube does the trick.

But this week when the weather got cold for the first time this season, my bike started making a noise that I had never heard it make before.

Every time I went over a bump there was a sickening rattle that seemed to come from the bottom of the frame. The longer I rode in the cold, the worse the rattle became.

“It’s gotta be a loose screw on the rack!” I thought.

But when I checked after the ride, the rack felt secure. Even more mystifying, when I looked the bike over again before heading out on my next ride, the rattle was gone. I was thankful, it must have been a fluke!

Such good fortune was not to be. Before I had biked a few miles the rattle returned in full force.

It wasn’t until Wednesday morning, when I was pulling into the driveway at work, that I finally caught on. Apparently, there was a loose screw, not on my bike rack, but in my brain. 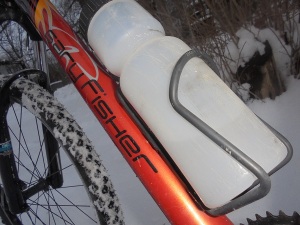 The culprit, a frozen water bottle