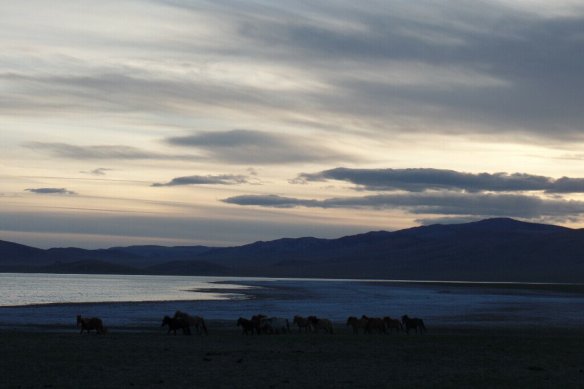 Arriving home in Lewis County fills me with the wonderful, comforting sense of belonging. I fit here. Although I have spent four months in two far-flung corners of the earth; first, the lush tropical environment of the Amazonian rainforest, then the open, everlasting expanses of Mongolian terrain and sky, as I return to Northern New York, I feel as though I have never left. But, I must admit, part of me is missing.

Before leaving for Brazil and Mongolia, I had a misconception buried in my subconscious. Deep down I believed that by visiting the rainforest of Brazil and the wild steppe and taiga of Mongolia, I would somehow master them, and could check them off some imagined list.

“Been there, done that.”

What a lie I told myself!

Instead I am returning to the United States to find that I am leaving a big part of my heart in a tiny jungle village with my sister and friends. Another bit of my heart has been scattered across Mongolia.

Oh, Mongolia! You captured my heart in numerous ways and I am still reeling, trying to find a way to wrap my mind around the journey you took me on!

It is high time to tell some stories from our bike tour but I am not sure where to start. So I will begin in the most logical fashion and I’ll start at the end.

Light filtered into my tent and my first conscious thought was,

Sunrise comes early in the northern Mongolia spring, the sun shines brightly by 5:45, but this morning I had missed the early sunrise and it was almost seven. I lay in my tent and basked in the sun’s free warmth, because warmth is a rare luxury in this corner of the country. Bittersweet thoughts swirled in my mind. Today was a monumental day, our last day of actual bike touring. On one hand, it is a relief to finish a bike tour and realise that your body and bike are still functional; but on the other hand, AHHH!!! CAN I PLEASE JUST KEEP BIKING HERE FOREVER?

But then a more important thought crossed my mind. We needed water.

The night before, Bekah and I had found a small lake and were quite thrilled by the prospect of having a beautiful place to set up our tents and refill our water bottles. But the closer we rode to the lake the more our initial thrill dissipated. It began when Bekah made a comment about something smelling rank. I glanced over to make sure her nose wasn’t pointed in my direction because I not only smelled rank, I felt the rankness rising from my body. Hot showers were nearly nonexistent on this bike tour. But soon we both discovered that the source of the smell was not us (this time) it was the lake.

What a stinky, stinky lake. 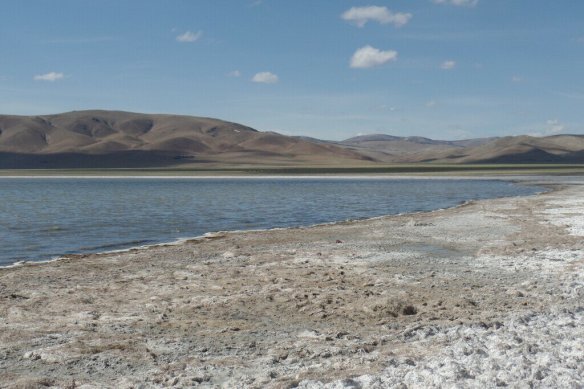 Closer inspection revealed a shoreline composed of thick, grey mud with a layer of white powder to top it off. And rotting carcasses of dead animals. Refilling our water bottles with that muddy sludge? Not gonna happen. We went to bed disappointed.

But mornings are a prime time for water-refilling expeditions so I sent off on my bike to see if the other side of the lake was a bit more, ummm, watery. Less dead bodies would also be a plus.

As I rode, my mood slowly rose to a glorious height. Waterfowl chattered softly amoungst themselves, the gentle sun turning their tan feathers a cheerful golden color. Protective mares led their new, spindly legged, wide eyed foals to the water’s edge. The land rose up from the lake, curving towards the sky in series of hills in every direction. And speaking of the sky, the light hue of that azul masterpiece was the perfect backdrop to the calm of the Mongolian steppe. The track I had chosen to ride on was just sandy enough to rouse my muscles from their night of rest and into the comfortable heat of a moderate cycling pace.

As my mind reached past this contented state, I morphed into a downright determined state of mind. This ride was going to be successful. I was going to find drinkable water. And once I get my mind this set about something, there is no turning back.

So turn back I did not.

A few miles further along the shore, boulders jutted out into the lake. Perching carefully on one of these rocks, I skimmed enough clear water off the surface to supply Bekah and I with fresh water for the entire day. I chortled happily to myself. Success is so sweet. I rode back to camp, the cool, heavy weight of the water bag slung tightly across my back, my own triumphant treasure. Bekah congratulated me as the conquering hero that I clearly was and a jubilant mood abounded.

We had visitors during breakfast and at first they were not of the human variety. Large herds of livestock started swarming past us to get down the lake’s edge. Behind us, sheep and goats slowly grazed their way down to the lake. Flanking us to the left and right, horses tossed their manes playfully in each other’s direction, trotting effortlessly along the shore. Front and center, the yak herd reigned supreme, snorting loudly to each other. A contingent of yaks plunged past the sludge and into the lake, stopping only when their massive bodies were half submerged by its depths while a responsible yak stayed on the shore with a nursery of young calves. 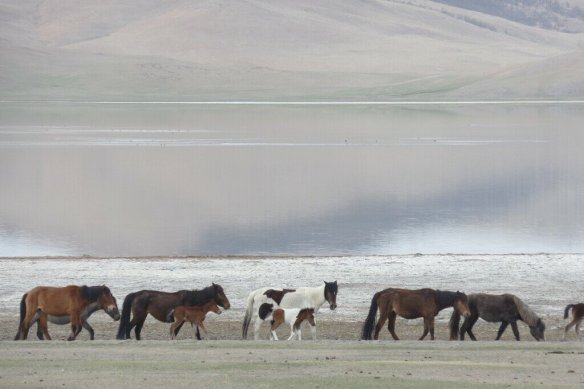 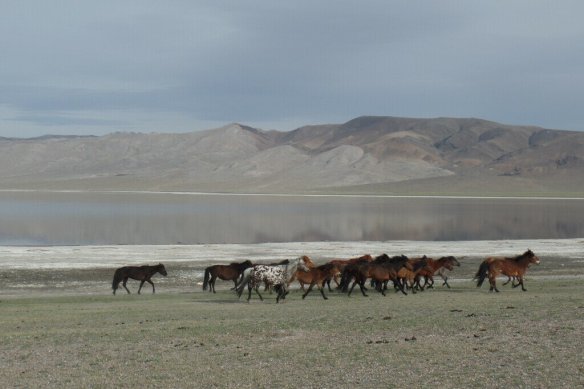 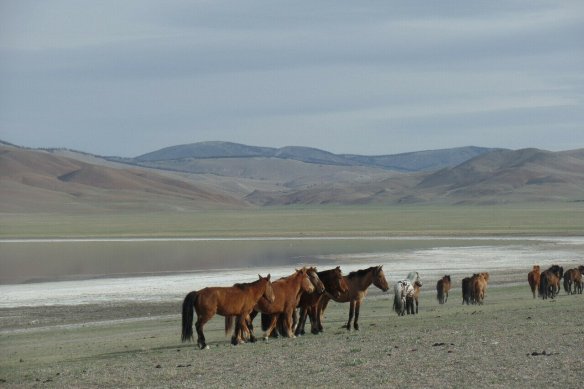 The atmosphere was what I imagine an African oasis to feel like: diverse animal species coming together to enjoy a morning by the water. The only part that was missing was the African part.

Then the human visitors showed up, two curious herdsmen, whose animals I was ogling so closely. We showed them where we had come from and where we going and one of them was utterly fascinated by my fold out map of Mongolia. He even pointed at the different Asian countries on the front of the map, wanting to know and/or confirm each country. The other herdsman arrived a bit later and despite the language barrier he made it clear that he was very impressed and congratulatory of our cycling tour. Bekah shared some food with them before they went on their way. 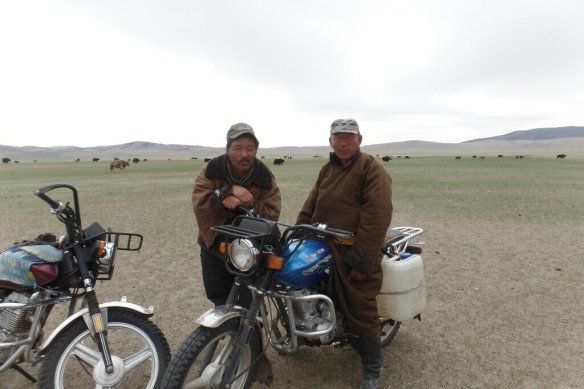 It was time to get rolling. We slowly gained in elevation as we headed away from the lake and back toward the paved road that would take us to Murun. 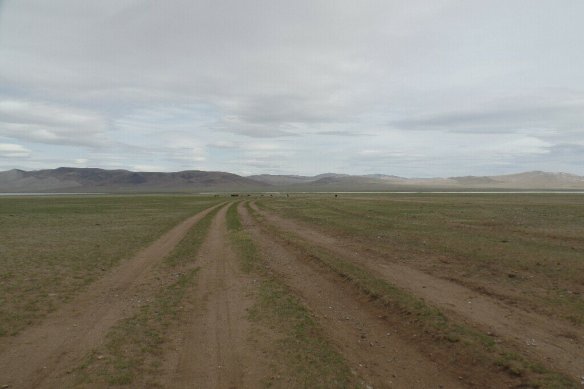 An hour or so later, I reached the paved road and stopped to refill my water bottle with the lake water that Bekah had painstakingly purified. As Bekah joined me on the road I drank deeply.

The taste that met my lips sent my brain spinning through one of those flashback montages where the clueless character in the story finally pieces the truth together.

My great conquest, my treasure; carefully purified and then filtered, was, of course, salt water.

The horrible stench, the white powder that caked our shoes and dried on the top of our water bottles became very clear signs that we had camped on the edge of a salt lake.

My morning’s ride to get water, once bathed in the light of a glorious victory, now was revealed to be a fool’s errand. Our once precious water was soon trickling down the road as we emptied our water bottles. The utter ridiculousness of the situation kept me amused for miles. What a bizzare way to end a bike tour.

But I was also worried, how were we ever going to make it Murun alive without any water?

(To calm the fears of my friends and family, I promise I that the the above sentence is sarcastic. Murun was only twenty miles away at that point and it turned out that sixteen of those miles were down hill. Plus, there were gers dotting the hillside, if we had really needed water we could have asked at any of the homes and refilled our water bottles. And Bekah did have a smidge of water left.)

By the time we reached Murun, we were a bit on the thirsty side but still elated. We had completed our cycling tour, now all we had to do was crowd onto a bus with our bikes and survive the thirteen hour trip to Ulaanbaatar. It was time to head to Northern New York. ‘Cause no matter how much I miss my sister or fall in love with a country in Asia, when I am in Lewis County my heart still feels at home.