When I left the United States on January 18th, I had a plan. A simple plan.

Buying a bike was simple. Thank you, Streetbike! Finding any sort of bike trainer, however, proved to be impossible. My sister and I had visited every bicycle shop in Ji-Parana and they had all told us they had no turbo trainers. But the last bike shop, Palace of Bicycles, held out a beacon of hope. They did not have a turbo trainer, but they were sure one of the other shops did. So the super helpful lady at Palace of Bicycles picked up the phone to call the other bicycle shop. She had a bit of trouble convincing the folks at the shop that they did indeed have a trainer, but with her persuasion they decided to take a look around. Sure enough, they soon found it hanging on the wall, in plain sight.

I was in business at last!

Once we made it out of the city, over six hours of bumpy red dirt roads and across a river, we made it to the village and to my sister’s small thatched roofed home. I set up my bike on the hard dirt floor and then it was time to ride!

I had never ridden a bike on a trainer before. I had certainly never ridden a bike in such humid heat before. Let me tell you that this distinct combo of bike trainer and humid heat produces an amount of sweat that is extremely overwhelming and absolutely disgusting. I had rivers of sweat running down my arms and dripping merrily onto the dry dirt floor! Dabbing the sweat away with a towel helped temporarily but once a few seconds passed my arms became the Rio de Sweat once more.

As I kept riding the trainer every day, I soon grew accustomed to my new cycling (aka sweating) regimen. I was quite pleased with my bike/trainer setup. But the children in the village were not only pleased by my shiny red and black bicycle, they were enthralled! All of them took at least one turn pushing the pedals. Two of the girls, however, made it part of their daily routine to gleefully ride my little bikey. And once they discovered that three girls could ride on the bike-all at the same time-they realized my bike was way cooler then I was! Is there anything more joyful then three little friends giggling on a bike?

I had to leave the jungle and my newfound friends far too soon. But my Brazilian bicycle adventures were far from over, there were many more memories to make in the last ten days while I was in Ji-Parana.

In Ji-Parana, I rode my bike “for real”, without the turbo trainer, for the first time in ten weeks. I felt so giddy to be riding down a road with beautiful fields on both sides and with the wind, the glorious wind in my face. The traffic on the road was light and the cars gave me a respectful berth. But at the very end of my ride, something happened that shook me to my core. 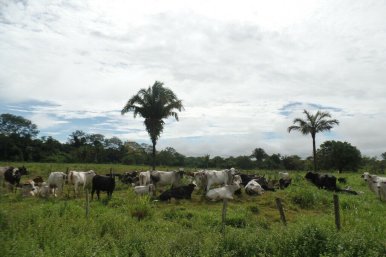 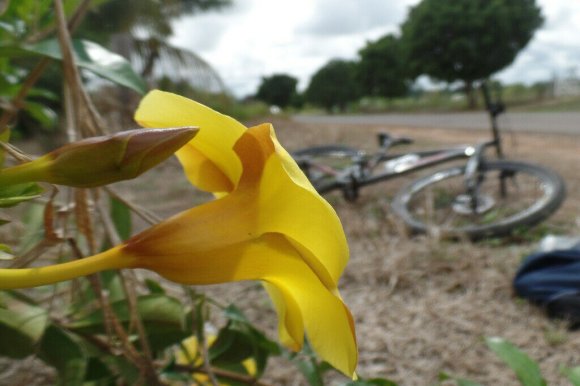 I saw a dog. I thought the dog hadn’t seen me, so I kept riding past, unperturbed. Somehow that single dog multiplied suddenly into a pack of three dogs, all lean and fast. I sprinted with all my might, with my vulnerable legs only inches away from a dog’s leering teeth. Foolishly, I had provided myself with no protection for such a scenario, even my water bottle was tucked into the bag on my back. I screamed,”NO!!!” at the top of my voice, but the dogs didn’t even flinch.

There was no way out but through. I went for it, accelerating like my life depended on it. My life didn’t depend on it, of course, but my left leg sure did. The triumph of leaving a pack of athletic dogs in the dust was soon mine and once I could breathe again, I looked up to see three guys leaning on their motorcycles, laughing at me! What to me had been a narrow escape and glorious victory, had been to them the unexpected sight of a screaming girl weaving her way amongst three canines. Feeling that my version of the event was more justified, I plastered on a huge smile that hopefully said, “I was totally in control of the situation and bested those fierce beasts” as I passed them by.

On the rest of the ride I berated myself. Free roaming dogs in Brazil aren’t aggressive, they just like to chase things. If I had slowed down to a boring pace when I first saw that dog, my legs would not have been put in such peril. Lesson learned. I decided to continue riding the same route in the days to come to make sure I got over my fear and could put my new plan into action.

And it was on that very same road that I met a group of cyclists out for a ride. I couldn’t help myself, I had to go talk to them! They were very friendly and although I could barely communicate with them, camaraderie among cyclists crosses language barriers and we had a great ride together. I even tried to tell my dog story to one of them in very, very broken Portuguese. One of the cyclists did speak English and he told me of his travels which have taken him all over, even to New York City. It was a wonderful experience and I even got invited to come back and ride again sometime! 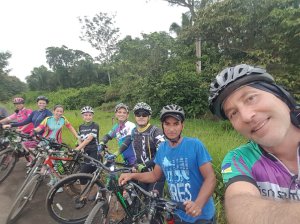 Two of the group cyclist’s photos are courtesy of Salles, who shared them with me!

What made my time cycling in Brazil really special were all the rides my sister and I went on together. Most of them were shorter rides, running errands all over Ji-Parana, but on two occasions we left the city behind and enjoyed a quieter, more rural road. I might have even been lulled into thinking we were back in Lewis County together if it weren’t for the tropical trees and pairs of macaws flying overhead.

As I leave Brazil, I bid a sorrowful goodbye to this beautiful country and it’s wonderful, friendly people, but most of all to my dear sister. It is hard to be excited about returning to the United States even though a bike adventure, more thrilling then I ever dreamed, is right around the corner. It’s time for me and a friend to go on a bike tour. It’s time for Mongolia!