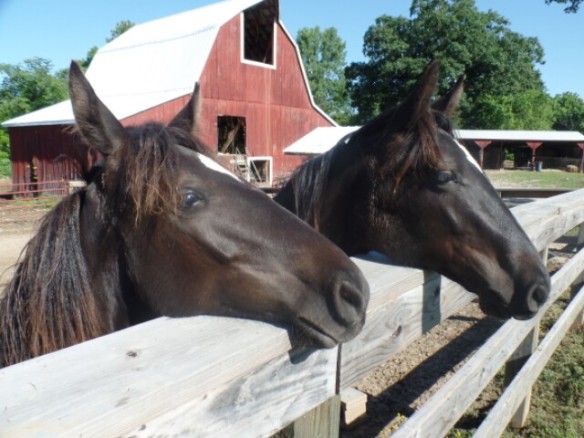 It has been such a good day today.

First of all, we crossed the Mississippi! (And I took zero pictures because there was no place I felt safe to do so…) We are in Missouri and have begun our climb into the Ozarks. There were so many little rolling hills today, the perfect kind where if you sprint really hard on the downhill you can fly up the next hill without even trying.

Noah is more a fan of gradual grades, so I don’t think he was quite as delighted as I was but we both broke our personal speed records on one glorious downhill slope and I think he would agree it was mad fun. He broke the 40 mph barrier for the first time and got up to 40.7 mph and I made it up to 43.6 mph. I have a feeling we will be setting new personal bests again soon, the Ozarks have some great hills to fly down. 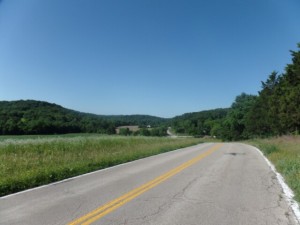 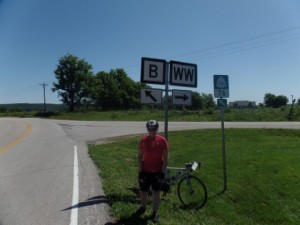 The state routes in Missouri are marked with letters not numbers and the signs look like scabble tiles! Noah didn’t believe me until he saw the signs. Kept us chuckling all day long.

The scenery is insanely beautiful, sometimes even biking seems way too fast to take it all in. We also saw armadillos for the first time today. There were three of them and they were all dead. Thank you, vehicles.

That is the roughest part of cycling for me, seeing all the roadkill every day. In the past week we have seen dozens of smashed turtle shells each day. But we do help some cross the road successfully so that makes us smile! 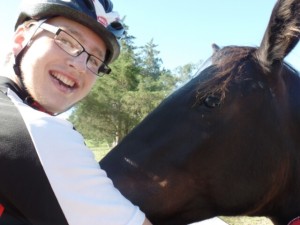 The entire point of bike touring is to make friends with animals along the way. 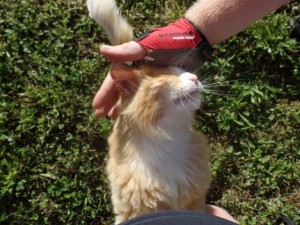 This cat was something else! While we were petting the horses, it dashed across a field to steal the spotlight. What a friendly kitty!

Another thing that made Noah and I happy was the news that our parents have booked a place to stay in Silverthorne, Colorado for the week of June 21st and they and two more of our brothers are going to fly out and we are all going to meet up together there. So exciting!!

The only bad event of the day came when I met a beautiful collie as I was passing a farm. I thought he was friendly, so I kept up a medium speed and just said, “Good dog!” as I passed him. 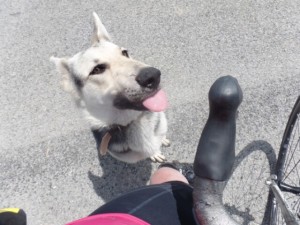 This dog on the other hand, was a good dog. He never barked at us, just joyfully ran alongside us for half a mile before running home. (He did run right in front of Noah’s wheel and both of them got a few scratches…but it was an accident.)

But he was not a good dog. He bared his teeth and bit into my pannier, snapping one off my clips and pulling the entire bag off the rack. He tried to drag it off the road but I yelled at him and then Noah came to help me as well. Of course, the owner was mystified that her dog would cause that sort of damage.

“He always chases the cyclist’s but he never hurts them!” Hmmm. I love dogs, but I really wish more dog owners would understand that dogs instinctively chase and bite things that move. Bicycles are the perfect dog magnets! Whether they mean real harm or not, it always puts me on edge to see a dog running across a field toward my bike. I asked the owner to please restrain their dog because I knew that one of the cyclists we have met on the Trans America Trail would be passing by later and I didn’t want the dog to take out his panniers as well! (He and his family are awesome, here is their website if you want to check them out.)

Noah rigged up a couple of bungee cords to keep the pannier in place and we rode the rest of the day without anymore problems.

And now we are at a nice little campground and the only thing I can think about is how I never, ever, ever, want this trip to end. 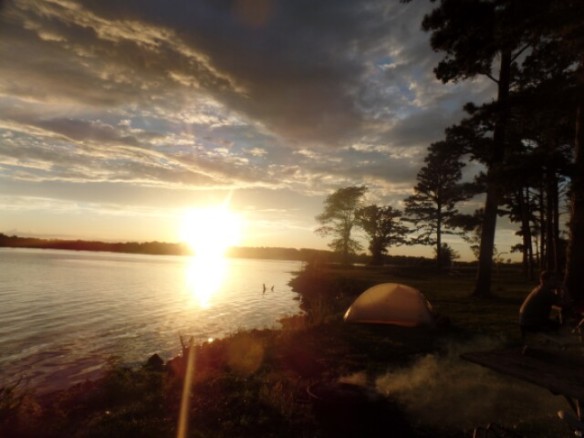 Camping a few nights ago on Crab Orchard Lake

37 thoughts on “West of the Mississippi”