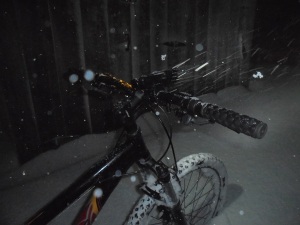 It rained Saturday and Sunday, making all of our snow disappear. When I went to bed last night the wind was howling and rain was pounding on my window.

The morning brought a whole new world. The temperature had dropped, transforming the rain into soft, fluffy flakes of snow. My ride to work was beautiful-for the first time this winter I got to bike through a snowstorm in the dark.

Riding through the falling snow under a black sky was incredible. I just wanted to stare into the millions of snowflakes as they whirled and danced gently to the ground, but I managed to keep most of my attention on the road since sliding into a ditch is not ideal.

My world was small, out on that road. It consisted of only two things: the snow on the ground and the snow in the air. What a wonderful world to be in!

I know that I can pray to God anytime and anywhere, but out in a snowstorm like this I can feel His presence so close to me. It is one of my favorite times to talk to God, out in the peaceful splendor of whirling snow.

A fox tiptoed daintily across the road, leaving tiny footprints. I wondered if he was commuting as well, or just out enjoying the weather.

It was favorite commute so far in 2016 and I arrived at the restaurant pumped and ready to work hard.

But I didn’t end up working very hard. All the local schools had a snow day and many business were closed as well, so my boss decided to shut down at 9:30. Then came the exciting part; getting my boss’s car that had become engulfed by a giant pile of snow, onto the road. It took a lot of shoveling to dig the poor thing out. Then I stood on the road and made sure it was all-clear before giving my boss the go ahead. She zoomed up the small incline though the deep snow and onto the road.

This is my boss’s car, after four hours of being in the parking lot

Then I went to the shed, took out my bike and simply carried it to the road. Using a bike for transportation in the winter comes with perks!

Going home took a long time. The road hadn’t been plowed for a while and the visibility was terrible. Not wanting to take any chances, I clung to the right side of the road, out of the reach of the cars.

Over the course of my ten mile journey, I spotted three vehicles that had slid off the road. I asked one guy if he wanted help (he had help on the way) but the other two cars were so stuck that they had been abandoned. 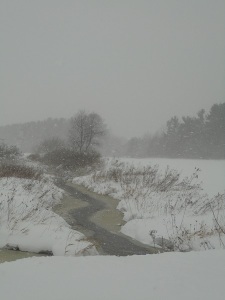 The rain created a lot of run off, turning this stream into a nasty brown river

One guy, in a beat-up pickup, told me to get off the road, even though I was already on the shoulder and completely out of his way. Maybe he actually said, “Your lights are cool.”

While I was biking through town a guy shoveling snow saw me and nudged his buddy.

I grinned and gave him a thumbs up.