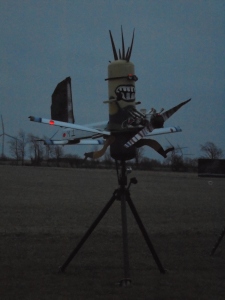 Have you ever wanted a weather vane that is actually a spiky-haired minion, flying a fighter jet?

Yesterday, I started innocently chatting with my coworker about her weekend. It was a nice conversation until she dropped this bomb,

“Apparently, they are saying that we won’t get any snow before mid-January.”

A wave of complete and absolute dread swept over me.

I was unsettled, not only by what she had said, but at my strong emotional reaction to the rumored delay in snowfall. Retreating back into the kitchen, I mulled over my response. Why had a simple weather prediction/rumor hit me so hard?

This is what I realized.

Biking year-round has been fun for me so far because I have, for the most part, embraced each season as it comes. But in the past few weeks, I have let that attitude slide. I began to desire winter to return so fiercely that I lost sight of enjoying the current weather.

The truth is, that I have allowed my biking to get stale and I have been blaming my lack of motivation on the lack of snow. I guess I planned to sit by and twiddle my thumbs until snow swept in like a knight in shining amour and transformed my world into a glistening, magical adventure-land ready to be explored.

I love winter. Ever since the beginning of spring, in the back of my mind, I have been dreaming and planning what I would do when snow made its triumphant return. Honestly, I have been hoping for a winter identical to last winter.

But winter marches to the beat of its own drum. It will come when it comes. And I need to remember that each winter is unique-chances are we won’t get the same amount of snowfall that we experienced last year.

So I am gonna stop obsessing over signs of snow in the 10-day forecast, comparing this year’s weather to last year’s and moping over the non-existent snow.

To put my new resolve into action, I left the house this morning a few hours before sunrise.

I biked up into a state forest and rode on uninhabited dirt roads. Flanked on either side by silent trees, with my headlight to guide me, I followed the road as it wound its way through the sleeping forest.

I stopped a few times just to enjoy the complete and utter stillness.

Quietly, I sang to myself. I tried singing some Christmas carols, but they didn’t seem to fit as my bike and I plunged through the mud, so I ended up singing How Great Thou Art instead.

Slowly, light began to filter through the leafless branches of the trees and the sky turned from black to blue. It was time to loop around and head home, I needed to be back so that I could babysit at nine.

On the way back, I found some potholes, filled with water and frozen over. They were too tempting to resist and I rode through them, crunching through the ice happily. 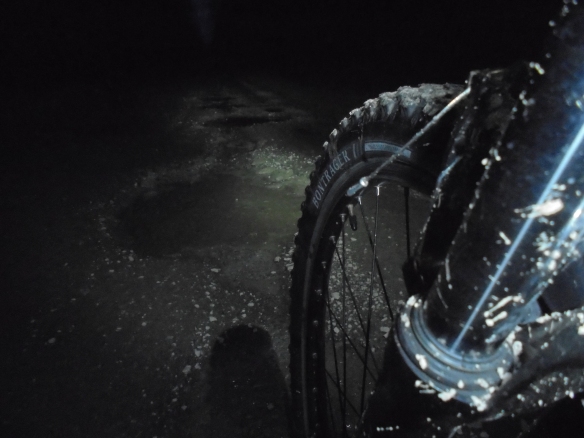 If we’ll need a good washing anyway, might as well get as muddy as possible. 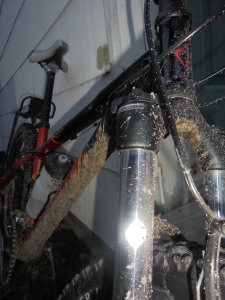 My bike and I returned home, completely and utterly filthy. It may premature to say this, but I think this ride has cured me of my pre-winter doldrums.

Am I still eagerly anticipating snowflakes?
You bet!
But I am not going to sit around any longer waiting anxiously for their arrival. The time for adventures is now.