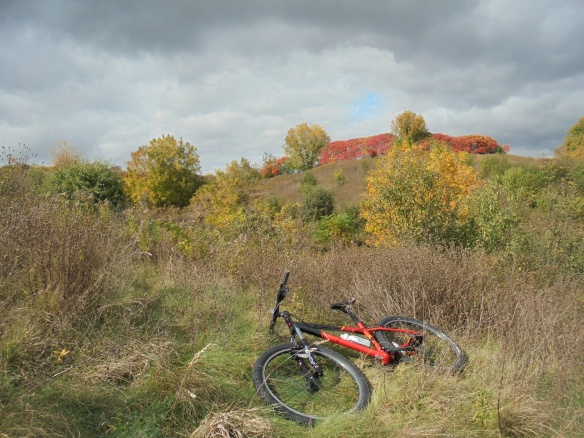 Yesterday, in the afternoon, I took my newly acquired mountain bike on its first ride. After riding on the road all summer, I was excited to go off-road, so we went to a nearby snowmobile trail to try out our abilities. The trail is mostly thick grass and tall weeds with some cornfield sections mixed in for fun.

The grass was so thick it covered up all the holes, bumps and rocks. But my mountain bike, with its huge tires, ate up anything in its path. I stopped trying to figure out where all the woodchuck holes and giant rocks were located because this bike can take on anything. 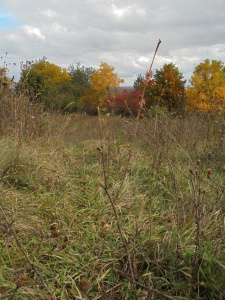 This is the trail. 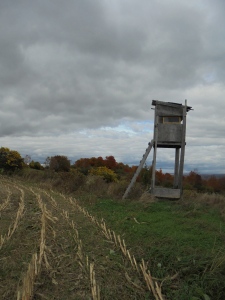 This is a deer stand.

I did forget one thing about this trail though. I forgot that it has a better view of the surrounding area than anywhere else I have been locally. From the high ridge where is the trail is located I can see the entire river valley spread out before me, with the Adirondacks framing it in the background. I can also look around and see my entire community. This view is even more spectacular right now because we are just leaving the peak of the Fall foliage season. Looking down into the valley I could see rivers of gold, strands of orange and patches of brilliant red. The bike and I stopped for awhile just to try to take it all in. I know there are many jaw dropping vistas all around the world, and I want to see some of them someday, but this one will always be the best because this one is mine. 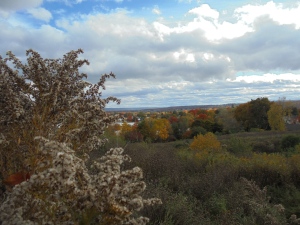 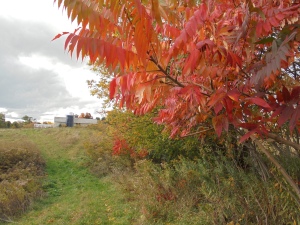 We continued on our ride, spotting deer and a few turkeys. The trail was over way to soon and I felt like I was just getting a handle on the feel of my new bike so we went back for a second time. We were going up an incline, when suddenly I was pedaling faster than I ever had before in my entire life. The chain had snapped.

The offending link had one side broken off. Nice. But because I am a newbie who is willing to try anything, I decided to make an attempt to hobble my chain back together even though I didn’t have any tools. Guess what? It didn’t work. But it did get my hands looking real nasty.

There was only one thing to do. I slammed down my seat post. It was time to use a specialized skill that I acquired last winter. Bikescootering. I sat on my bike and put one foot on the pedal while using the other foot to propel myself along. Gotta say, it is a lot easier in winter when there are snow banks to push against.

After getting off the trail, I walked my bike home except for sections when I could coast downhill. You see, bikescootering is a skill best kept private. Onlookers can die from observing bikescootering in action. That is where we get the phrase “die laughing”.

Overall, I think it was a great off road test ride. Test rides supposed to expose weaknesses in a bike. I believe I have found my mountain bike’s weakness. It needs a new chain.

16 thoughts on “One perfect failure of a test ride.”