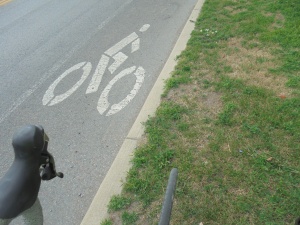 Twenty-five miles north of where I live lies the “big city”. Pretty much everyone who lives in my community travels to this city whenever they need to get some serious shopping done. I don’t like shopping, especially serious-type shopping, so I avoid visiting the big city whenever possible.

But yesterday my youngest brother was playing soccer at the city’s fairgrounds and I decided it was time to face the city, on my bike, for the first time ever. My bike and I stick to rural areas and small towns but now it was time to face the music and see how we would fare in the world of urban biking. We were both a bit on edge. On the ride, I kept glancing at my clipless pedals. Was I really skilled enough to clip in and out properly in roads with bazillions of cars and traffic lights?

The last two miles into the city were all downhill and suddenly, without warning, it was time to turn left and join the city traffic. Gulp. Here we go.

But it wasn’t bad at all, to surprise of my bike and I. No cars honking or crowding us or trying to cut us off. Even though my mind was on hyper-alert mode, I was able to enjoy the fact that I can keep up with cars in the city. I had imagined getting stuck behind every red light, but I was able to stay with flow of traffic and cruise through green light after green light. I think I actually had a bit of fun, but don’t tell anyone that!

I even got to ride my bike, for the very first time, on a designated bike lane, complete with symbols. Strangely enough, none of the cyclists I observed actually used the lane. Most rode on the sidewalks and while one guy was riding in the bike lane, he was riding against the flow of traffic, directly toward me.

“Are we playing a game of chicken?” I nervously wondered.

But he swerved into the street and avoided ramming into me, thank goodness.

The highlight of the night was hanging out with my family, watched my brother’s soccer game. He scored the first goal of the season (you go bro) and his team won 4-1.

I was able to make my way out of the city before nightfall and then my bike and I got lost in the calm and coolness of a late summer night. But we must not have actually gotten lost because we ended up at home.

As I pulled into the yard, my neighbor was pulling out in his car.

“Oh man, you get me every single time!” He called out the window. “I always think the police are after us!”

28 thoughts on “Country bike goes to the big city.”