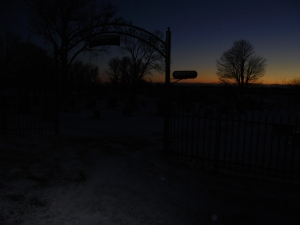 This is actually a picture from months ago, but I forgot to bring my camera with me today…

3:30am
Gentle tones suddenly echoed through my bedroom from a small cellphone, insisting that it was time for me to get out of bed. But I stubbornly rolled over and kept my eyes closed, because I knew that I still had sixty seconds until…

Ah! There it was. The alarm changed from gentle soothing noises to the loudest, most obnoxious tune known to man, yes, now it was time to wake up. Before I knew it I was out the door and on my bike, darting through side streets in the predawn morning, until I reached the state road that would take me to my workplace.

The air had a slight edge of cold. I took a deep breath and looked to the dark, black sky. A tiny sliver of moon shone, dyed orange and gleaming brightly. I followed the light of the moon down the road as it wound its way to the river. As I followed the river, the moon’s reflection appeared in the water, as a smudge of color dancing on the dark surface. Fog rose from the river, spilled onto the road and soon I plunged into it. The beam from my headlight morphed into a cone of lit fog, causing the beam to appear three dimensional.

As I climbed up the hill, away from the river, away from the fog, I heard a car cautiously approach from behind. Many of the vehicles on the road this time of the morning are familiar ones; the milk truck, the blue mini van, the black pickup, the utility van with reflective tape, but the current vehicle, I guessed, was a newcomer to early morning on this state road.

“What are those flashing red lights?” The driver may have wondered. They then solidified their newbie status by passing me with their turn signal on. No one else does that.

I crested the hill, pedaling steadily, shifting into a higher gear for the descent into the little village that lay ahead. Underneath the street lights, I checked the display on my cycle computer.

4:36am.
Perfect. Five miles down, five miles to go and I was right on schedule, no need to hurry. Groves of trees continually tried to obscure the sliver of the moon from my view, but always, as I rode on, the moon lifted above the trees, taunting them from the sky. I realized the sky had turned to a navy blue and slowly the moon was losing some of its orange glow. To the east, I could see fragile hints of colors, purple and pink were cautiously making their way into the sky.

I heard a bird sing softly and hesitantly, as if it was not quite sure if the sun was on its way. But then another bird backed up first bird’s soft singing with a triumphant trill. “The sun is coming, it will be here soon,” it proclaimed into the semi-darkness.

Underneath the navy blue sky, I thought many thoughts. Some were deep, others were silly, a few were sad or frightening, one was exciting, but most were happy, joyful thoughts. While I was consumed with a swirl of ponderings, a van pulled in onto the shoulder in front of me and stopped.

Instantly, my pulse increased its tempo and my senses became fully alert. What was this van up to and what should I do next? But then I chuckled. The van was delivering newspapers, there was no need for raised hackles. On I pedaled and then I went into my drops for a small downhill section. As I moved my hands, I noticed several strands of silk threads stretched across my handlebar. Those spiders! How do they manage to get my bike every single time?

My bike and I sailed down the hill and then came across a herd of cows, sleeping out in a field. They were flopped every which way and in the dim light I could not make out much more than their basic shapes. Onward we went, a fading moon leading the way. Turning a corner, I could now see, laid out, the beginning of dawn and it was beautiful. I began to sing,

“The sun comes up
It’s a new day dawning
It’s time to sing your song again
Whatever may pass
And whatever lies before me
Let me be singing when the evening comes”
From 10,000 Reasons by Matt Redman

I made it my prayer, under the dark blue sky. And then I was biking into town, only one small hill left between me and work. As I climbed it, none other than the giant white dog came out to greet me, his bark reverberating loudly through the sleeping town. I passed by him and a minute later I pulled into the parking lot at work. I tucked my bike carefully into the shed, unlocked the door to the restaurant and took one last, happy look at the eastern sky before stepping inside.

A few minutes later my coworker asked me how my bike ride was. Part of me wanted to spill a load of superlatives like: perfect and magical, stunning and beautiful, exciting and breathtaking, but it didn’t really make sense to say that. If I did, then she might ask why my ride was so magnificent. And what could I say? Nothing about my ride was out of the ordinary, it was just a mundane ten miles to work on my bike. But everything was so special, it always is. It is those ordinary morning rides that I hold close to my heart, the ones where nothing really happens but I arrive at work feeling alive from head to toe.

So I smiled at her and said, “It was good, really good.”