Yesterday on my ride home I noticed that the snowmobile trail which intersects the road I was biking on had thawed and turned very muddy. That got the wheels in my mind turning. Mud would make the trail impassable for snowmobiles, the obvious conclusion being that it was time to turn the trail into a designated bicycle path. 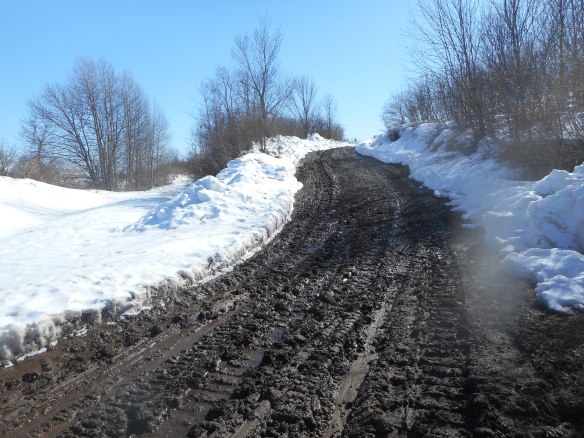 My lens got a bit of mud on it, oops.

So today I veered off the shoulder of the road and into the mud.

It is always fun to get off the road and head for the hills.

But when I crested the hill and went around a bend the mud was replaced by a layer of corn stalks, husks and cobs. I had never biked over corn paraphernalia before and  quickly discovered that it is super bumpy. More like jarring.  I began to follow this trail of corncobs and was led into an open field where the wind had blown powdery snow into the ruts of the trail. 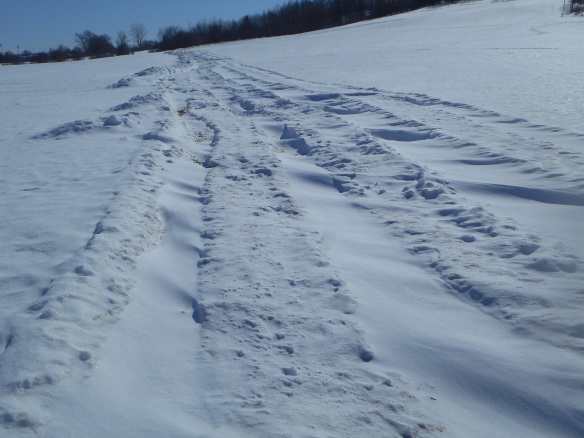 All I can say is, my bike handling skills have really improved over the winter. Even though I was biking through snow over a bumpy surface that I couldn’t see or predict, I was able to stay upright.

I crossed the field successfully and then began to traverse a section of hardened snow. While crossing a small stream that was underneath a thick cover of snow, one of my legs plunged into the snow and my boot got stuck.

After making it over the stream I was able to bike on top of the snow. But every little while the rear tire would sink deep into snow and need to be rescued. Then me and my bike came to a barbed wire fence. The trick was that the fence was hidden under the snow where we crossing. I got off the bike to walk over the fence, knowing that if I was super unlucky my leg could plunge into soft snow right where the barbs would scratch it. But today wasn’t my super unlucky day and the snow held until we made it over the fence.

You can see part of the fence here, a few posts are barely sticking out over the top of the snow before the whole thing disappears under the snow.

A few hundred yards of hardened snow later, we came into the fairgrounds and headed home. Can’t wait for Monday.